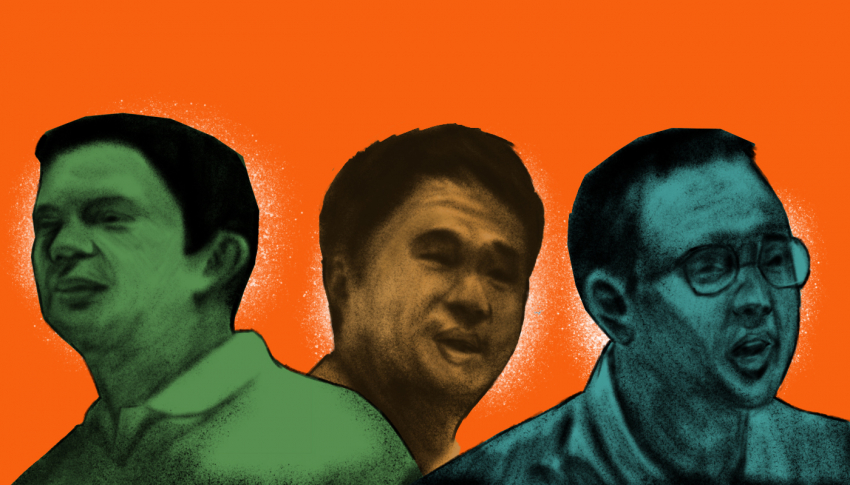 Three winning senatorial candidates and three individuals who ran for national posts in the May 2022 polls declared excess election funds, according to the Philippine Center for Investigative Journalism (PCIJ)’s review of campaign-finance records.

No specific election law dictates what candidates must do about excess contributions. But if the amount is taken as income, the candidate must report it to the Bureau of Internal Revenue (BIR) and pay the corresponding income tax.

In a letter to PCIJ, Escudero said he would pay income tax on the excess donations he had kept.

“(T)he excess amount of P702,457.57 has been made transparent and duly accounted for as it already appears on my Statement of Contributions and Expenditures (SOCE),” he wrote on Sept. 22, 2022.

Escudero said the “excess fund is subject to income tax, which will be paid in due time as provided for by law or upon filing and submission of my annual income tax return for the year 2022.”

In response to PCIJ queries, Alfredo Labrador V, Cayetano’s chief of staff, said that the senator’s P9.9 million remaining fund is being spent for his privately-funded Sampung Libong Pag-asa and Emergency Response programs. He said this is being done “with prior agreement with (the senator’s) donors.”

Sampung Libong Pag-asa , Labrador wrote, provides “cash assistance to needy households” across the country. The Emergency Response program is a donation drive that provides food and non-food assistance to persons affected by disasters.

PCIJ also sent a request for comment to Villanueva to find out what he did with his remaining campaign funds. We have not received a response as of posting time.

The other candidates who reported excess donations were former Akbayan representative Walden Bello, former senator Leila de Lima, and Roy Cabonegro. Bello ran for vice president while De Lima and Cabonegro vied for a senate post. PCIJ has not yet received responses from the three. (See Table 1)

The Statements of Contributions and Expenditures or SOCEs of these six individuals did not indicate any unpaid obligations, which meant that the remaining amount would not be spent for any election expense.

In the summary form (Form 1) of his SOCE, former Ifugao representative Teodoro Baguilat Jr. declared receiving P2,400,274.88 and spending P52,115.01 out of his personal funds. While it may seem that he has excess funds, his statement of lawful expenditures (Form 4) shows that he spent P2,452,860.89. His staff told PCIJ that this was paid through donations. The amounts resulted in a zero balance or no surplus funds.

Marcos has yet to pay P27.5 million worth of election expenses, according to his SOCE submitted on June 7, 2022. Lacson and Eleazar meanwhile still have P619,493.34 and P1.65 million in unpaid obligations.

(PCIJ has obtained access to the SOCEs filed by national candidates. It does not have information on who reported excess donations at the local level.) 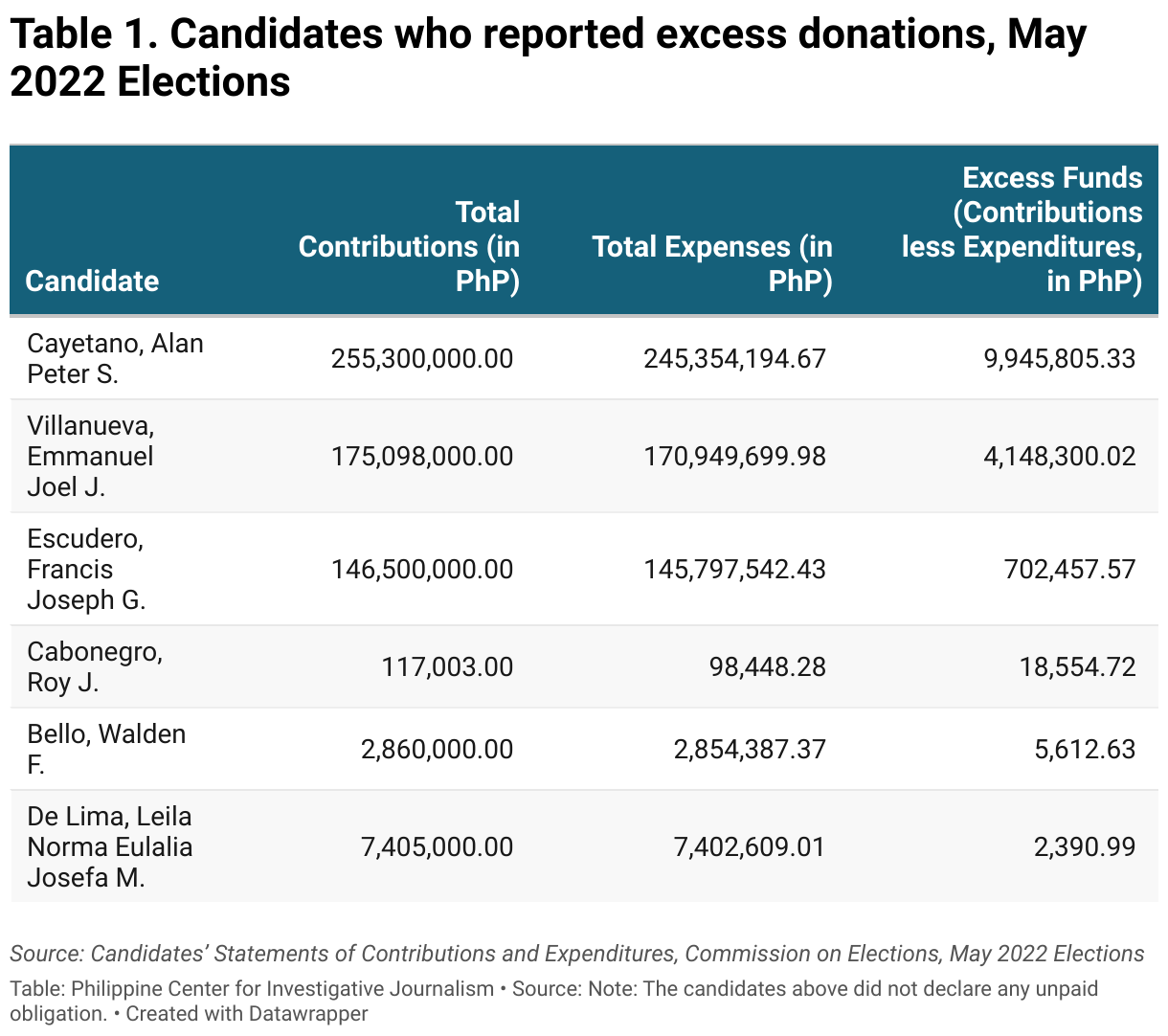 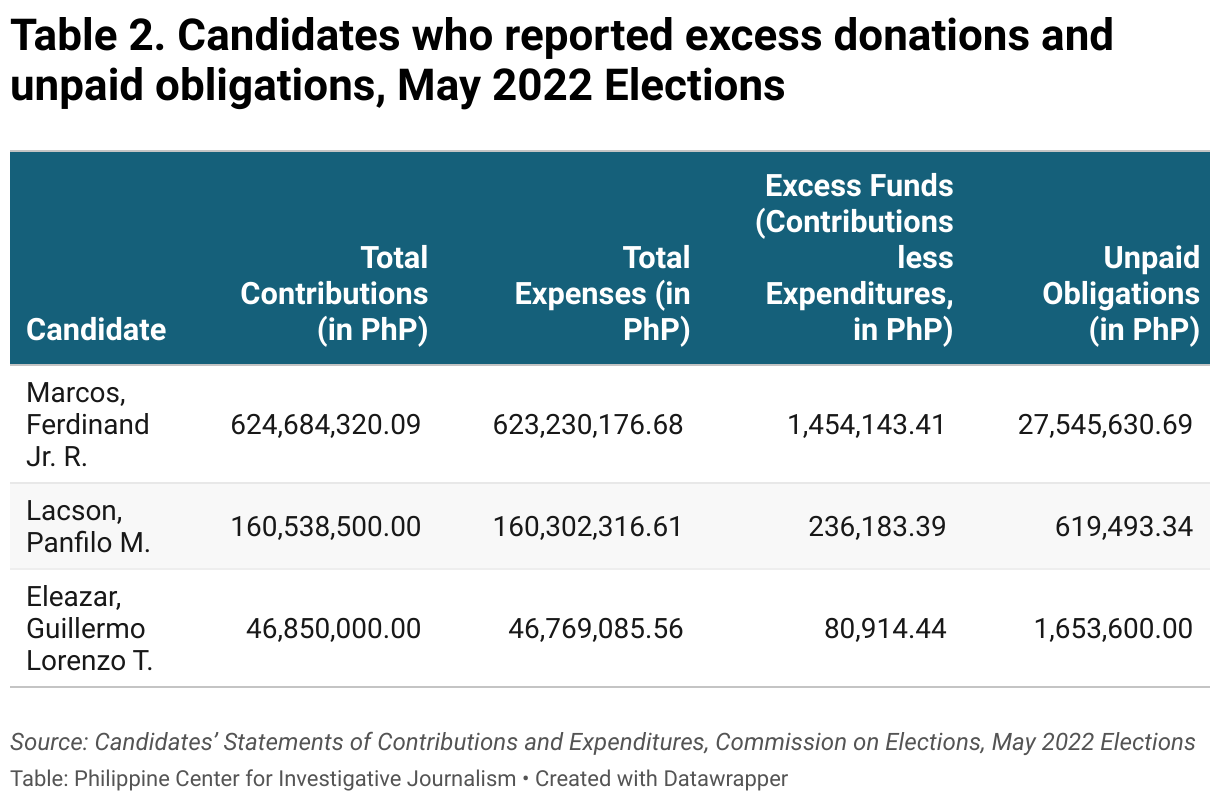 Elections as a money-making venture?

Eric Jude Alvia, secretary general of the National Citizens’ Movement for Free Elections (Namfrel), said the issue of excess funds kept on recurring because no law provided for how a candidate must utilize extra campaign money.

Section 5 of Comelec Resolution No. 9991 offers a rule on what to do with surplus funds if it is treated as income: pay tax. The resolution states that any “unexpended balance from any contribution to a candidate or party, also known as excess contributions, shall be subject to income tax.”

Efraim Bag-id, director of the Comelec Campaign Finance Office (CFO), said the BIR would countercheck by getting copies of the candidates’ SOCEs.

Section 2 of the BIR’s Revenue Regulations No. 7-2011 states that “campaign contributions net of the candidate’s campaign expenditures, shall be considered as subject to income tax, and as such, must be included in the candidate’s taxable income as stated in his/her Income Tax Return (ITR) filed for the subject taxable year.”

However, Namfrel’s national chairperson, Angel Averia Jr., said that whatever money was retained by the candidate from campaign contributions should not be treated as personal income.

“Either they return it to the donors or donate it to the party,” he said.

Averia said the windfall from excess campaign money was one reason many individuals ran for office even if they were not likely to win.

“There should be rules on how the contributions will be treated. If it goes to the party, that the party can retain the excess for its operations, may defined na pupuntahan ‘yung pera,” he said.

Alvia, also of Namfrel, said there should be an explicit understanding between candidate and donor on what to do with the excess funds.

Election lawyer Emil Maranon III pointed out that election law caps only applied to expenditures, not to contributions.

By default, donations are subject to 6% donor’s tax, but become tax-free when given to support an electoral campaign.

“So in order for you to circumvent the law, all you need to do is to over-contribute. Kasi remember… there [are] no limitations as regards to contribution. The limitation is on the expenditure. So [that means] you (donor) can donate P50 billion and [candidates] spend P1 million. It’s legally possible. And remember, when you donate P50 billion, it’s tax-free. So ‘yun ‘yung isang loophole diyan,” he said.

In 2016, then senatorial candidate Lacson also declared P2.54 million excess donations. He told PCIJ that he returned the surplus amount to his donors.

In 2009, Pampanga Rep. Juan Miguel “Mikey” Arroyo, son of former president Gloria Macapagal-Arroyo, said in an interview that he was able to acquire a beachfront house in Foster City, California worth $1.32 million using his wedding gifts and campaign contributions.

Vera Files later reported that Arroyo’s statements of contributions and expenses for the last two congressional elections then show zero donations to his campaign, which he reported as having been funded from his own pocket.

The BIR at the time found tax deficiencies after a review of Arroyo’s Statement of Assets, Liabilities, and Net Worth (SALN) from 2004 to 2009 and his income tax returns filed for certain years during the same period.

The BIR accused Arroyo of understating his taxable income and filed a complaint before the Department of Justice in April 2011. The Court of Tax Appeals, however, acquitted Arroyo in May 2018, noting that the case was based only on “mere speculations and probabilities.”

Arwin Serrano, a member of the board of trustees of the Parish Pastoral Council for Responsible Voting, said a law was needed to address issues concerning campaign finance and other election issues, including what to do with excess funds.

In the 19th Congress, several bills were filed before the House of Representatives to amend Batas Pambansa Bilang 881 or the Omnibus Election Code. Many of these bills were related to the postponement of the December 2022 Barangay and Sangguniang Kabataan Elections. But there were also measures to increase campaign expense limits, prohibit candidate substitution by reason of withdrawal, prohibit acts of premature campaigning, and define the use of internet and social media in lawful election propaganda.   At the Senate, Sen. Imee Marcos filed a bill for a new Omnibus Election Code. The measure included a provision on excess funds but only repeated the existing rule that any remaining contribution was subject to income tax unless the candidate, political party, or party-list group returned the unutilized funds to donors.