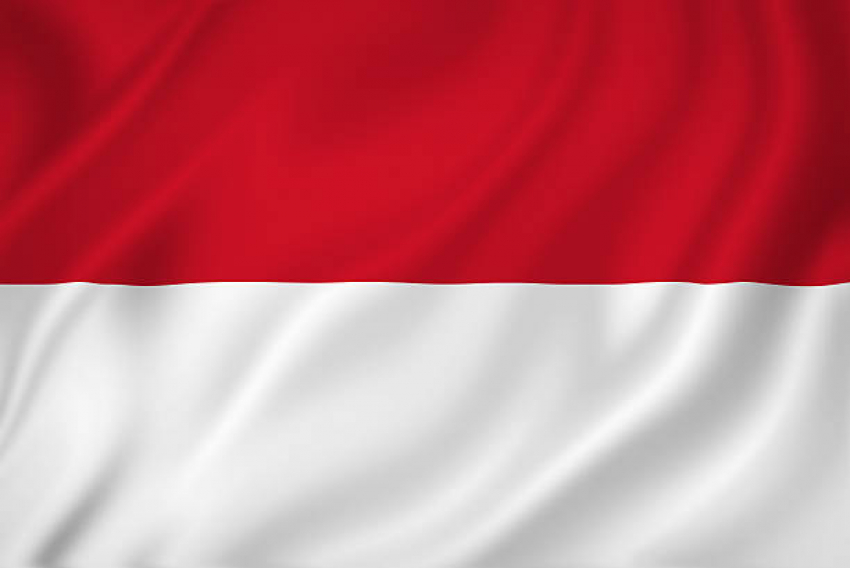 At the end of November 2020, the Panel of Judges of the Pelalawan District Court in Riau Province, sentenced a public elementary school principal with the initials BH to four months in prison and a fine of Rp. 2 million or a subsidiary of one month of imprisonment.

The verdict was applied after BH was proven guilty of campaigning in favor of one of the candidates in the 2020 regional head elections. Pelalawan Regency in Riau, is one of 270 regions holding elections to vote for a regent.

BH violated the Law on the Neutrality of the state civil apparatus. During the trial, it was revealed that the head of the public school was active in campaigning for one of the regional election candidates in Sering Village, Pelalawan District, on October 15, 2020.

The local village inspector actually had warned BH about the violation of the law, but BH ignored the warning. Instead, he continued the campaign and put up the flag of a political party that supported one of the candidates. BH even gave a speech on behalf of the host during the campaign, taking pictures, posing while his fingers forming the symbol that obviously supported the candidate.

Not only in Pelalawan, Riau, similar cases also happened in Gowa Regency, South Sulawesi. The local District Court judges convicted a state apparatus with the initials RN a one month prison sentence with two months probation. RN was proven guilty of violating the regulation of neutrality of state apparatus during the 2020 regional elections. This case was brought to trial following a legal process by the Gowa Regency Integrated Law Enforcement Center (Gakkumdu).

An Upward Trend of Violations

Cases in the districts of Pelalawan, Riau and Gowa, South Sulawesi are just a tip of the iceberg of violations related to the neutrality of state apparatus in regional elections.

Referring to the findings of the National Civil Service Agency (BKN), from 2015 to 2019, there were at least 815 complaints of violations of ASN neutrality that occured during elections. The data became a reference and was included in the 2020 Election Monitoring Notes report issued by the Election Supervisory Body (Bawaslu) of the Republic of Indonesia.

Referring to the data from Bawaslu obtained from the state apparatus commission, the complaints about violations of the civil servant neutrality during elections continue to show a rising trend over the years.

In 2015, for example, there were only 29 complaints about the neutrality of civil servants. That number jumped to 52 in the 2017 elections and reached its peak in the following year, which recorded up to 507 complaints. This number is a ten-fold increase compared to the previous year's elections.

In 2019, the number of complaints decreased to 229. Based on the data collected by Bawaslu, the spike in cases of state apparatus neutrality occurred even when the regional elections were attended by fewer regions.

In the 2015 elections, for example, there were 269 regions holding the democratic event, but only 29 cases were recorded. In the 2017 elections involving 101 regions, the number of reported cases jumped to 52. 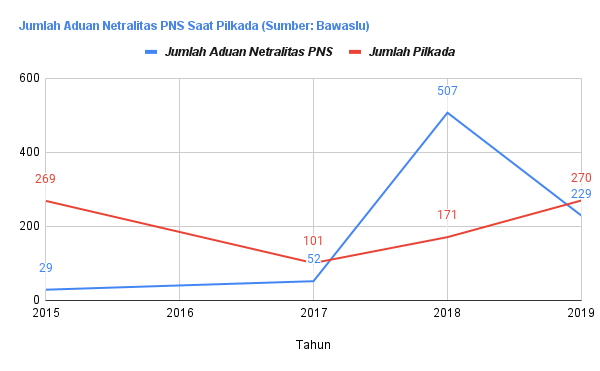 Graphic: Trend of Complaints about the Neutrality of State Civil Apparatus (Source: Bawaslu)

The types of violations of state apparatus neutrality during the elections also varied, but at least grouped into six types of violations  described as follow: (1) playing a role or is involved in holding activities that lead to a tendency to support a candidate, (2) getting involved as campaign participants by using attributes of political parties or attributes of civil servants, (3) making decisions or actions that are beneficial or detrimental to one of the candidates by utilizing their profession or authority, (4) being registered or proven to be the member of a political party, (5) being involved in supporting one of the candidate pairs through activities or the provision of facilities and goods, (6) using public facilities related to positions for campaign activities. 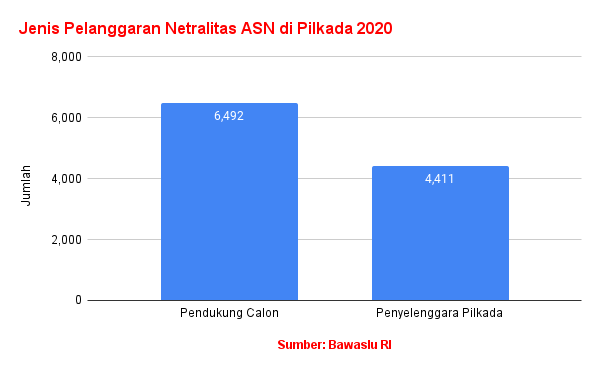 Unfortunately, of the thousands of violations of state apparatus neutrality reported to BKN, not all of them received strict sanctions, such as being convicted in court. Most violations only result in administrative sanctions. In the 2020 elections, out of a total of 1,116 alleged violations of ASN neutrality that were followed up to the state apparatus commission, 80 percent or the majority of the cases were forwarded to the Civil Service Supervisory Officer (PPK) and resulted only in administrative sanctions.

Impact of Bureaucrats Involvement in Politics and Elections

Criticism of the involvement of bureaucrats or state administrators in the regional elections, as well as the legislative or presidential elections has often been conveyed by the civil society.

The criticism is understandable, considering the bad effects that arise from this fraudulent practice. Secretary of the Ministry of State Apparatus Empowerment and Bureaucratic Reform (PANRB) Dwi Wahyu Atmaji when opening the Focused Discussion on the Implementation of State Apparatus Neutrality in the 2020 Simultaneous Regional Head Elections in Central Java, virtually, in June 2021, expressed his concern over cases of violations of bureaucratic neutrality.

Quoted from the official website of the Ministry of State Apparatus Empowerment and Bureaucratic Reform, Atmaji said that based on data from state apparatus commission, during the 2020 Pilkada there were 604 civil servants who were proven to have violated the rules of neutrality and were recommended to be subject to sanctions by regional heads.

When referring to the survey in the field of assessment and development of the commission system in 2018, violations of ASN neutrality were mostly caused by the desire to get or maintain positions or projects.

This kind of practice has far-reaching implications. The neutrality will have an impact on service discrimination, the emergence of gaps within the state aparatus scope, conflicts of interest, and  being unprofessional in carrying out their duties.

The bureaucrats' involvement in politics during elections are also prone to corrupt practices. The use of state facilities to the regional budget for the benefit of a handful of people who are competing for the elections can easily be done by bureaucrats who are not neutral.

Furthermore, the non-neutral civil servants worsens the quality of democracy development in Indonesia. Elections should be clean of any fraudulent practices and violations by bureaucrats.

Many feared that the challenges of the 2024 elections will be more difficult than the previous years. In the history of Indonesia, the largest general election will take place for the first time. The 2024 elections will include seven voting events at once. Participants will vote for the candidates of presidential election; legislative elections for the House of Representatives, provincial legislative council, regency/municipality legislative council; regional representatives council (DPD) elections, and regional elections to vote for mayors and regents. All will be held simultaneously in the same year.

Supervision challenges will be even harder in the 2024 regional elections, including how to monitor and suppress cases of state apparatus neutrality. Chairman of the State Civil Apparatus Commission Agus Pramusinto predicted that cases of such violations would increase in the 2024 elections.

"Based on the results of monitoring the implementation of the 2020 elections, we predict that the number of violations of neutrality will be higher, because all provinces and regencies/cities are participating in the simultaneous voting," said Agus Pramusinto as quoted by ANTARA last May. (**)